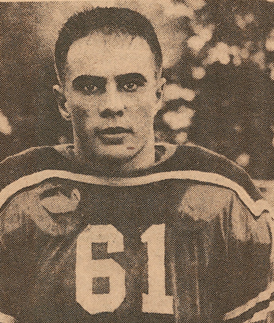 ​ “I have just seen Superman in the flesh. He wears number 35 on his Army jersey. His name is Felix ‘Doc’ Blanchard.” When Blanchard was a boy, his father, Felix Blanchard ​Sr. would put a football in his crib at night in hopes that Doc would grow up a football lover like his old man. Felix Sr. did not have the same support from his parents regarding sports. While playing ball at Tulane in New Orleans, Felix Sr. had to play under the name “Beaullieu” to avoid his Louisiana French parents finding out about his discouraged actions. Felix Sr. would have never been allowed to play such a sport, even though he weighed two-hundred and fifty pounds and ran like a “blooded race horse.” The Tulane coaching staff would assist with the “Beaullieu Lie” going so far as to call other teams and ensure the secret stayed safe inside the locker rooms. Doc Blanchard did not have the same experience as his father because he shared the same passion, football. No one knows if it was because of the football in his crib as a baby or just throwing the ball with his dad, but one thing is for sure, Felix ‘Doc’ Blanchard was the best football player to ever come out of Saint Stanislaus, and is arguably among some of the greatest college fullbacks of all time.
Doc Blanchard's career at SSC began when he was a freshman, following his transfer from a New Orleans area high school. Stanislaus coach Pete Burge took a notice of Blanchard early on in his sophomore year. He would be punter for the team that year, and led a strong backfield for the Rocks. Blanchard immediately began to prove his strength and was consistently a difference maker is every game. He scored two touchdowns against Moss Point and scored the only touchdown in a game against a very powerful St. Aloysius squad. Later in the season, he scored twice in a 22-13 victory over Biloxi. 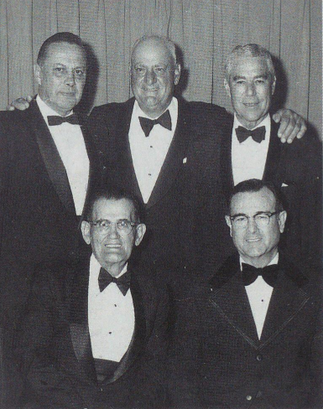 While Blanchard is known for his time on the gridiron, he also played basketball and ran track and field. He was unable to play his sophomore basketball season because he contracted pneumonia. As football rolled around again for Blanchard's junior year, it was well known he would lead the squad and be the best player on the team. As he was tearing up the football field, he was also very involved in SSC life. He was named by the junior class "King of the Harvest Ball," an annual ball for students at SSC and their dates. Blanchard also was runner-up for "Most Popular" and was appointed one of the junior class reps in Student Council. In 1941, he won the shot put for the SSC track team at Bay High School. Doc Blanchard began to catch the eyes of college scouts his junior year and was deemed one of the top recruits at his position, fullback. Blanchard would finish his football career at the United States Military Academy at West Point, where he became known as "Mr. Inside." His counterpart, Glenn Davis, was "Mr. Outside." He would become the first college athlete to win the Heisman, Maxwell, and Sullivan Awards all in the same year. Blanchard's accomplishments on the field created a bright light that would shine on SSC for years to come. He is often considered the best player to come out of our doors, and is mostly likely one of the best to come out of Mississippi. Doc Blanchard was inducted into the Saint Stanislaus Hall of Fame in 1972 (pictured).